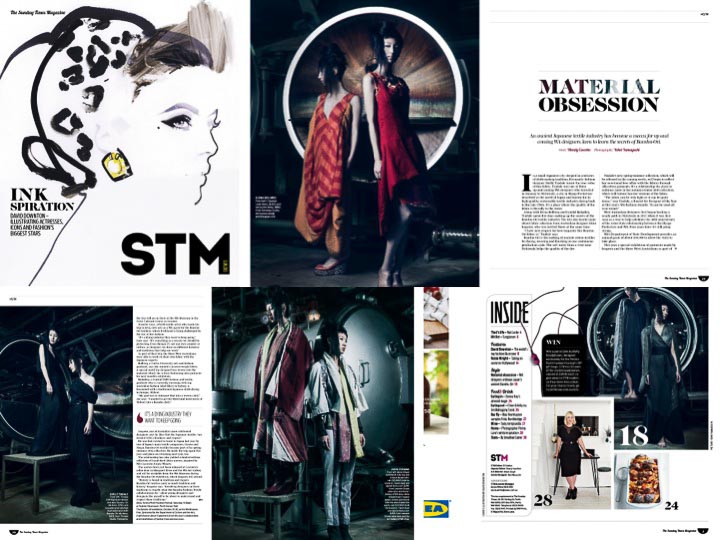 An ancient Japanese textile industry has become a mecca for up and coming WA designers, keen to learn the secrets of Banshu-Ori.

In a small Japanese city steeped in centuries of cloth-making tradition, Fremantle designer Shelly Tindale learnt the true value of fine fabric. Tindale was one of three up-and-coming WA designers who travelled in January to Nishiwaki, a city in Hyogo Prefecture described as the navel of Japan and known for its high-quality, sustainable textile industry dating back to the late 1700’s. It’s a place here the quality of the fabric is literally in the water.
Along with Elena Bollweg and Lyndal Malarkey, Tindale spent five days soaking up the secrets of the Banshu-ori textile industry. the trio also learnt more about fabric selection from Australian designer Akira Isogawa, who was invited there at the same time.
“I have new respect for how exquisite this Banshu-Ori fabric is” Tindale says.
Banshu-Ori is the making of ancient cotton textiles by dyeing, weaving and finishing in one continuous production cycle. the soft water from a river near Nishiwaki helps the quality of the dye.
Tindale’s new spring-summer collection, which will be realised in the coming weeks, will begin to reflect her new-found love affair with the fabrics through silk-cotton garments. It’s a relationship she plans to embrace more in her autumn-winter 2016 collection, which will feature heavier versions of the fabric.
” The fabric can be very light or it can be quite dense” says Tindale, a finalist for Designer of the Year at this year’s WA Fashion Awards. “It can be used all year round.”
West Australian designers first began beating a yearly path to Nishiwaki in 2011 when it was first seen as a way to help celebrate the 30th anniversary of the sister-state relationship between the Hyogo Prefecture and WA Four years later it’s still going strong.
WA’s Department of State development provides an annual grant of about $10,000 to allow the visits to take place.
This year a special exhibition of garments made by Isogawa and the three West Australians as part of the trip will go on show at the WA Museum in the Perth Cultural Centre in October.
Jennifer Gaye, a Perth textile artist who made the trip in 2012, now acts as a WA agent for the Banshu-Ori textilers, whose livelihood is being challenged by the rise of fast fashion. “It’s a dying industry they want to keep going,” Gaye says. “It’s something as a society we should be protecting. Even though its not our own country or culture, as designers we draw on different histories and traditions that help our work.”
As part of their trip, the three West Australians were able to work on their own fabric with the Japanese experts.
Bollweg, a Curtin university arts and fashion graduate, says she wanted a heavier-weight fabric. A special motif she designed was wove into the material, which she is busy fashioning into garments for next month’s exhibition.
Malarkey, a Central TAFE Fashion and textile graduate who is currently interning with top Australian fashion label Ellery in Sydney, is fascinated with traditional Japanese cloth-dyeing technique, Shibori. “My goal was to interpret that into a woven cloth,”  she says. “I wanted to get the bleed and movement of Shibori into a Banshu cloth.”
Isogawa, one of Australia’s most celebrated designers, says he likes that the Japanese textiles ” are treated with kindness and respect”.
He was first invited to travel to Japan last year by two of Japan’s main textile companies, Ozawa and Naigai. Banshu-Ori textiles became part of his spring-summer 2015 collection. He made the trip again this year and plans on returning next year. too.
The relationship has also yielded a limited -edition collection of hand-dyed Akira scarves. inspired by WA’s Leeuwin Estate Winery.
The scarves have just been released at Leeuwin’s cellar door in Margaret River and the WA Art Gallery and will be available from the WA Museum during the Banshu-Ori exhibition, which Isogawa will attend.
“History is found in tradition and Japan’s Banshu-Ori textiles carry so much tradition and history,” Isogawa says. “Involving designers in these traditions is exactly what the banshu Fashion textile collaborations do – allow young designers and designers like myself to be about to understand and respect these traditions.”